While I have read about George Martin’s performance at the 2020 Hugo Awards, I have not watched his self-indulgent antics myself. 150 minutes is too much time to spend in the cramped emotional world of yet another Horrible Old White Guy, and I used up my quota of horrified fascination watching another member of that species, Daniel Feller, embarrass everyone at the SHEAR (Society for Historians of the Early American Republic) conference last month. The two debacles did bear some similarity to one another. Both Feller and Martin were given a large online platform and a much larger audience than usual, and abused both. Both lionized formerly-respected and now justly-despised heroes of the past, in Feller’s case the murderous Andrew Jackson, in Martin’s the fascist sci-fi editor John Campbell and the incest-loving author Robert Heinlein. Both took the opportunity to piss on younger members of their profession, Feller by claiming that historians Jacqueline Peterson and Laurel Shire had completely misinterpreted Jackson’s relationship with Native Americans, GRRM by repeatedly mispronouncing the names of award winners. In short, both broke one of the essential rules of any viable society, professional or otherwise: don’t eat your young.

I know that it is hard to grow old, having recently crossed the Brimley/Cocoon horizon myself. One’s body fails, one’s friends fall permanently silent, the larger culture becomes the dominion of the young, the future becomes a realm of dread rather than hope. This is probably especially hard on science fiction authors and fans, who once saw the Future as our own special playground and are now losing it to younger, weirder successors who may not share all of our values. Some sci-fi franchises have turned the fears of the AARP set into central elements of their story lines: the first six Star Trek movies, for example, deal in large part with fear of old age and extinction, while the better Star Wars movies (episodes 4-8) all feature conflicts between the young and the old. (The younger characters usually win these battles, but they don’t always benefit from the victory.) We olds like these stories, and we have the cultural and financial resources to ensure they keep getting told.

Unfortunately, older SF fans and authors also have our fair share of narcissism and treacherousness, and are willing to use them in real life against the novices we should be helping. The World Science Fiction convention has seen too much of this inter-generational down-punching. The San Antonio con, for example, featured too many silverbacks muttering darkly about Miley Cyrus and the need to teach Heinlein in the schools. The 2018 Worldcon excluded several author panels whose members the program committee thought too obscure. GRRM’s two-and-a-half hours of auto-fellatio seems of a piece with this pattern of bad behavior. His message to the younger generation, intentional or not, is “The future doesn’t belong to you; it belongs to dead people who would have belittled or despised you.”

George Martin’s spectacle of the damned now lies, like his own professional relevance, in the past. Neither he nor the rest of us geriatric fans are going away, alas, and if we don’t want the rest of fandom and SFF authordom to despise us - or, worse, disappear because we have poisoned their cultural ecosystem - we need to develop a new code of ethical conduct for ourselves. This should include negative rules, like “Don’t grope younger fans or make excuses for Isaac Asimov’s having done so.” But we also need to reconsider our proper role within the SF community and the larger society, and for this we might re-purpose an idea from another aging fart of fandom, Larry Niven. More on this in a later post.
Posted by Dave Nichols at 7:54 AM No comments:

The Clueless among the Creepy

Jeffrey Epstein was a collector. He collected, by which I mean sequestered, exploited, and sexually assaulted, a large number of teenage girls. He also collected, by which I mean feted and flattered and befriended, many prominent and well-educated men. These included numerous scientists, whose approval the intellectually-insecure Epstein craved. Social networks in the hard sciences often interconnected with those in Greater Geekdom, and JE’s male acquaintances included science fiction writers. One of these, Greg Bear, recently admitted that he had socialized a bit with Epstein, having attended a conference the rape-meister sponsored in 2011. He recalled realizing something was amiss shortly after meeting his host: the financier was surrounded by attractive young women who seemed personally or economically dependent on him, and who did not socialize with the other guests. Bear later made a comment about “Dracula coming down out of his castle to ravage the young woman of the village.” Epstein, who overheard the remark, did not invite him back.

Bear reports that an old friend who knew Epstein had reassured him, prior to his own departure for the Caribbean, that JE was a safe acquaintance despite his 2008 conviction as a sex offender: “The man who did the things the press reported is not the person I’ve experienced.” While the author does not identify his friend, I strongly suspect that it was Gregory Benford, the physicist and sci-fi writer. The two traveled in the same scientifictional circles, and Benford had received grant money from Epstein’s science foundation.* Both belong to the same social category as most Grand Old Men of Sci-Fi: white, male, and encased in bubbles of privilege and politesse that made hobnobbing with a billionaire vampire seem normal, and questioning the background and agency of his female entourage seem impolite.

Bear's invitation to the Virgin Islands conference came by way of Marvin Minsky, who died a few years later. Minsky was a pioneering computer scientist with a connection to the world of SF: he served as a consultant to the makers of 2001: A Space Odyssey, and earned a brief mention in Arthur C. Clarke's novelization. Minsky seems to have fallen into a very different moral category from Bear and Benford: in August 2019, one of the survivors of Epstein's trafficking alleged that Minsky sexually assaulted her in 2001. The charge remains unsubstantiated, but not incredible; at least, Virginia Giuffre has little to gain from a false rape charge against a dead professor. I suspect more than one of Minsky's admirers feels creeped-out right now. Possibly including HAL 9000.


* A 2012 press release from the Epstein Foundation identifies Benford as a featured guest at one of JE's conferences, so the author almost certainly met his benefactor.
Posted by Dave Nichols at 5:19 AM 2 comments:

My brother and I watched Doctor Who religiously in the 1980s. The old BBC show carried with it more than a whiff of exoticism; British landscapes, British accents, and British terms (like "jelly babies") had not featured prominently in my childhood TV viewing. Moreover, it was pretty much the only contemporary sci-fi series on American television between the cancellation of Battlestar Galactica and the premiere of Star Trek: The Next Generation. The program's tedious longeurs, its cryptic references to old villains and story lines (some dating back to the dim dark 1960s), and the ridicule Pat and I endured from my mother and sister* only added to the program's mystique and our own devotion. What good is a religious exercise unaccompanied by bewilderment, frequent boredom, or persecution?

Given the opportunity to make a pilgrimage on behalf of our fandom, to attend an actual Doctor Who convention, Patrick and I seized it. In October 1985 we and our friend Andrew Sewell attended a Whovian festival in Fairfield, Connecticut. The con featured the Sixth Doctor, Colin Baker, as Guest of Honor. Along with the other attendees (almost all young, white, and male), we shopped for souvenirs/relics in the vendors' room, and watched two episodes rarely or never seen in the United States, "An Unearthly Child" (the first William Hartnell episode, aired in 1963) and "Revelation of the Daleks," which had aired in Britain quite recently. We enjoyed watching Baker caper on stage, and introduce himself with characteristic bombast and arrogance: "William Hartnell was the Doctor. Patrick Troughton was the Doctor. Jon Pertwee, Tom Baker, Peter Davison - they were the Doctor too. I am the Doctor!" (Applause.) His powers had their limits. One very self-assured fanboy - about 40 years old, bearded, corpulent, well-dressed - mounted the stage during Q&A to present Baker with a Dr. Who episode script he wanted made. Dr. Number Six returned it with a pained expression, saying he couldn't make production decisions. No-one in the audience, with the possible exception of Mr. Bearded Fanboy, held it against him.

The faithful must also grow used to disappointment. The Fairfield Whovian festival was technically our second Doctor Who convention; Patrick and I had traveled to New York City for an earlier con in July of 1983. Upon our arrival we found the building locked and a sign posted announcing the convention had been cancelled. We had received no advance notice and were of course quite disappointed. Our father gamely took us to lunch and to do some shopping at the old Compleat Strategist, but his comment on the cancellation proved so apt that I recall it every time I now hear of the program: "Doctor No-Show."**

* They particularly enjoyed sneering at Peter Davison's invocation of the TARDIS's cloister bell. "Oh, the TARDIS Cloister Bell is ringing!" they would cry in exaggerated British accents. In fairness, Davison himself deserved some of this abuse.

** Patrick had, as I recall, spent his own allowance money on the tickets, and did not get a refund for several months. The guest of honor, Jon Pertwee, did send him a generic signed photo as well. I guess that's the best we could expect from Doctor Number Three.
Posted by Dave Nichols at 6:24 AM 2 comments:

I was quite pleased to learn of Richard Grant’s nomination for an Academy Award. While not one of Mr. Grant’s most steadfast fans, I enjoyed his lively and expressive performances in The Player and A Royal Scandal, and look forward to his part in the next installment of Star Wars. 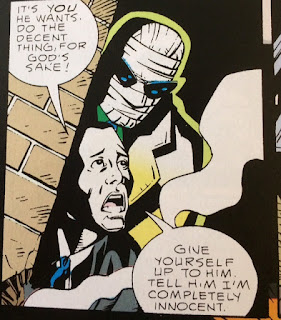 Moreover, while Mr. Grant may remain unaware of it, I also quite enjoyed his “performance,” or rather his uncredited appearance, in Grant Morrison’s run of Doom Patrol (issues 19-63, 1989-93), the offbeat DC comic-book series. Grant’s character Withnail, the dissolute, unkempt, and unrepentant star of Withnail and I, clearly provided the model for Morrison’s modern magus Willoughby Kipling, a recurrent character in DP. When I initially read Doom Patrol I assumed that Kipling served to satirize John Constantine, and certainly the two men bear a strong professional resemblance to one another. But the resemblance to Withnail is also unmistakable if one has seen the 1987 film (as I had not done when I first read the comic). Kipling shares Withnail’s lean physique and hawkish facial features, his scruffy demeanor and general booziness, and above all his pretension of world-weariness masking deep insecurity and cowardice. Faced with otherworldly enemies spouting anagrams and gunfire, Kipling either lets the Doom Patrol handle the threat or, in one instance, suggests they offer themselves to the foe as a sacrifice (just as Withnail does with his nameless friend). Faced with even greater existential terrors, Withnail/Kipling retreats into the bottle. “I demand a drink; it’s my right as an Englishman” is one of Grant Morrison’s lines, but it’s just as worthy of Richard Grant and his most distinctive film character. 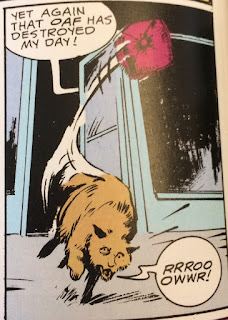 Morrison provides a further homage to Withnail and I in issue 42, in which he reveals that one of the residents of Danny the Street, an intelligent transvestite boulevard who eventually joins the Doom Patrol, is in fact Montague, Withnail’s effete, campy uncle (played by the late Richard Griffiths). Regrettably, he did not feel comfortable adding the viewpoint character from the film, played by Paul McGann, which is a pity since this would provide a two-degrees-of-separation connection between the Doom Patrol universe and that of Doctor Who.
Posted by Dave Nichols at 10:58 AM No comments: